“The police station opened in what was then called Cottage Row. The name was changed to Gerald Road in 1885. After years of debate about its future, in 1993 the police moved to the newly completed Belgravia police station. From Living in London: “The Old Police Station was converted into a magnificent private house in 1993. Ronnie Biggs, the Great Train robber, spent one night here.” There is some wonderful film of Gerald Road Police Station at British Pathe.

It’s difficult to believe what is there now is the same building as that shown in the film (which does not even have a front area), but it is clearly on the same site. In the film you can see some dates inscribed on the entrance to the station: AD 1894 and AD 1925. We guess that the building has been through a number of reincarnations and perhaps its current look is an attempt at recreating its original appearance. A Flickr photo from 1906 provides some information. If the film is anything to go by, the police had a lot of spare time on their hands back in 1957.” 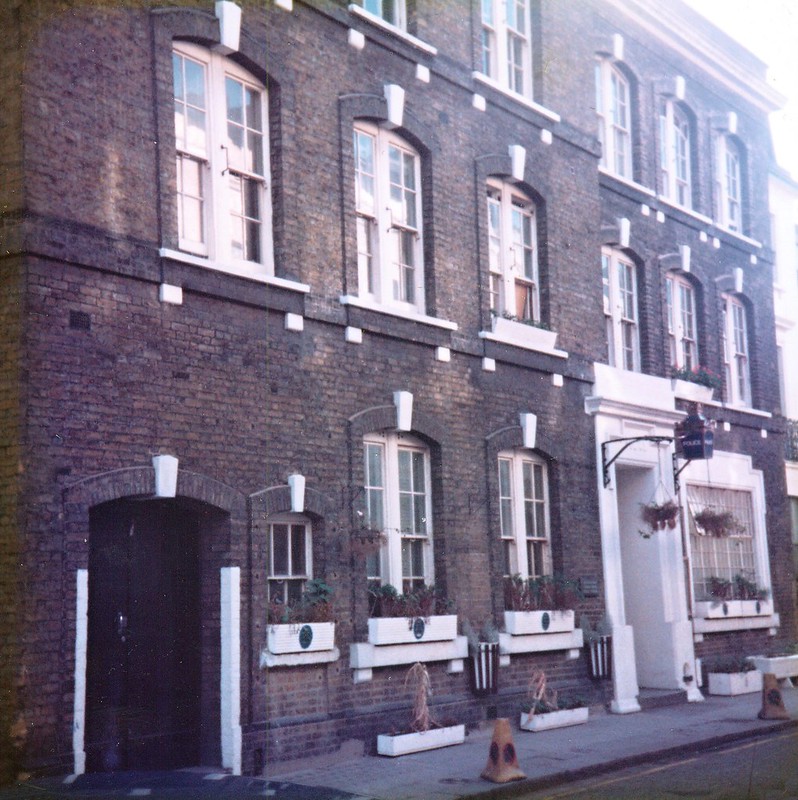 “(1947) The play was put into production, with Coward seeking a new, young cast…(Kenneth) More recalled being terrified when invited, alone, to Gerald Road…More burst out, ‘Oh Mr Coward, sir! I could never have an affair with you, because – because – you remind me of my father!’ Coward laughed and said, ‘Hello son’. Another young actor he had wanted for the play was Dirk Bogarde. He too was invited to Gerald Road where Coward pre-empted his nerves by announcing, ‘I shan’t jump on you. I’m not the type, and Gerald Road Police Station is immediately opposite. (The building is actually a few doors away on the same side of the street.) Would you care for a whistle or will you merely shout?’”